The maintenance plan for nuclear facilities involves our teams in regularly inspecting civil engineering structures to assess their condition and performance relative to their required functions.

We inspect all types of special coating (composite skins, resins, paints and metal liners) applied to an equally diverse range of substrates, identify issues and recommend solutions to guarantee the functional effectiveness and durability of coatings.

Our flagship projects include: 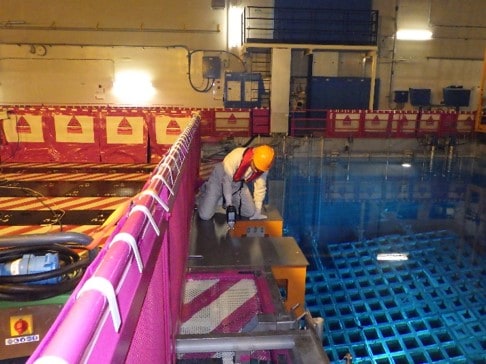 Our teams conduct a range of inspection campaigns for all types of nuclear facility structures. They are fully accredited to work in areas of ionising radiation and in restricted environments but require additional personal protection equipment (SCBA, ventilated hood, bubble suit, etc.). We analyse all structural and functional issues identified during inspections as the basis to prepare corrective and/or preventive maintenance plans and guarantee the safety and durability of the structures concerned.

Our team of around thirty people in 10 locations has been working since 2013 on civil engineering structural defect inspections as part of Basic Preventive Maintenance Plans:

Successful projects and teams throughout France

Our team of 30 people working across 10 sites have successfully completed the following inspections:

Since 2013, we have also been involved in inspections of civil engineering faults in relation to Basic Preventive Maintenance Plans, including:

Need to talk with an expert ? Contact us
With full transparency… By continuing to visit this website, you are agreeing to the use of cookies and other similar technologies by Soletanche Freyssinet (Sixense), in order to improve your experience on our site, to enable gathering traffic statistics and to enable sharing content on social medias.
Accept cookies
Decline all
Learn more
Cookie settings
Cookie Box Settings
Cookie Box Settings